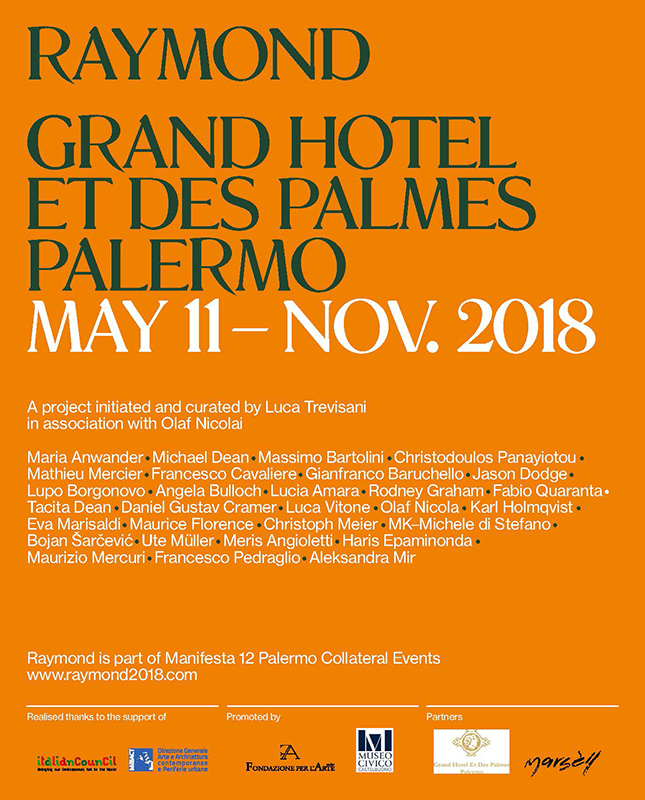 ←
→
Raymond is a project conceived as a homage to the figure of Raymond Roussel with the aim of
triggering a series of events, happenings and artworks in the spaces of the Grand Hotel et Des Palmes of Palermo, the place in which the French writer died on July 14, 1933, on the day
of the Celebrations for S. Rosalia, patron saint of the city.

Visionary writer, mesmerising dandy, radical traveller, eccentric President of the Republic of
Dreams, Roussel was among the most powerful innovators of the last century.
Raymond is a project developed considering the spaces, rhythms and metabolism of the Grand Hotel et Des Palmes. It is not a simple exhibition space but an enclosed world, a place for listening and living, a heterotopy, a multi-storied space made of a thousand levels. The hotel room is intended as a floating space, a place with a life its own, a body that is self-defined and self-contained. The project plays within the limits and features of the hotel’s life by drawing a non-linear but labyrinthine itinerary, spreading its own traces, details and performances, writing a story of appearances and ghosts inside the hotel’s most complex and greatest history. Raymond brings together international authors from different disciplines, backgrounds, attitudes and wisdom.

Raymond cultivates a poetic vocation, inviting visitors to enter into a temporary and parallel
world, a flow that slips gently the daily life of the hotel, seducing unaware travellers whilst
inviting them to a wild, intellectual and sensual journey, within the private and common spaces of the hotel.

There is no explicit plot, but a group of single works that generate narratives,
alternating visual elements, small principles of composition, actions, subtle and liminal
gestures.

The artworks designed for the occasion by invited authors will enrich the time spent by
guests in the hotel, picturing a designated show visible only to those who have the keys to a
determined room, or have booked the spaces, or somehow have gained access to them.

Raymond is an artist’s limited edition pamphlet of seven thousand printed copies, which
includes a calendar of events conceived by Luca Trevisani and an unpublished text by Daniela
Bigi, especially written for the occasion. Raymond is a public event that seeks, with irony, to test the limits of privacy and sharing. It is a project open to the world, the educated traveller,
the professional tourist.

Raymond is a project by the artist Luca Trevisani in collaboration with Fondazione per l’Arte onlus, winner of the second edition of Italian Council 2017, a competition ideated by Directorate- General for Contemporary Art and Architecture and Urban Peripheries (DGAAP) – organ of Ministry of Cultural Heritage and Activities and
Tourism, to promote Italian contemporary art in the world.